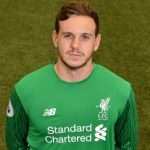 The ‘keeper turned in a Man of the Match performance during his senior debut in a one-off loan game for Wrexham’s Blue Square Bet Premier League rivals Tamworth.

Internationally, Ward has played at schoolboy, U17s, U19s and U21s level for his country and featured in a UEFA qualifying tournament based in Slovakia in September 2011.

In the summer of 2012, Ward was part of the first-team squad who made the trip out to North America for the pre-season tour.

The youngster was named on the bench 19 times in 2014-15 before sealing a loan move to League Two side Morecambe in March to gain further first-team experience.

Upon his return, the ‘keeper then agreed a new, long-term contract with Liverpool in June 2015. Days later, Ward join Aberdeen on a season-long loan deal.

After impressing during his temporary spell in Scotland he was recalled by Liverpool on January 11, 2016.

Ward was handed a Premier League debut during a 2-1 win at Bournemouth on April 17 and followed it up with a further run out against Swansea City.

And things were to get even better for the young stopper as he was included in Wales’ squad for the European Championship in France, starting the first fixture of an outstanding tournament for his country between the sticks in a 2-1 win over Slovakia.

Upon his return to Merseyside following his nation’s elimination at the semi-final stage, Ward signed a new long-term contract with Liverpool on July 11 and moved to Huddersfield on a season-long loan on the same day.

Ward proved to be a big favourite amongst the Terriers faithful as he made a big contribution as David Wagner’s side achieved promotion to the Premier League.

The Wales international made crucial saves in penalty shootouts during the play-off semi-final win over Sheffield Wednesday, and repeated those heroics in the dramatic spot-kick drama win over Reading at Wembley.